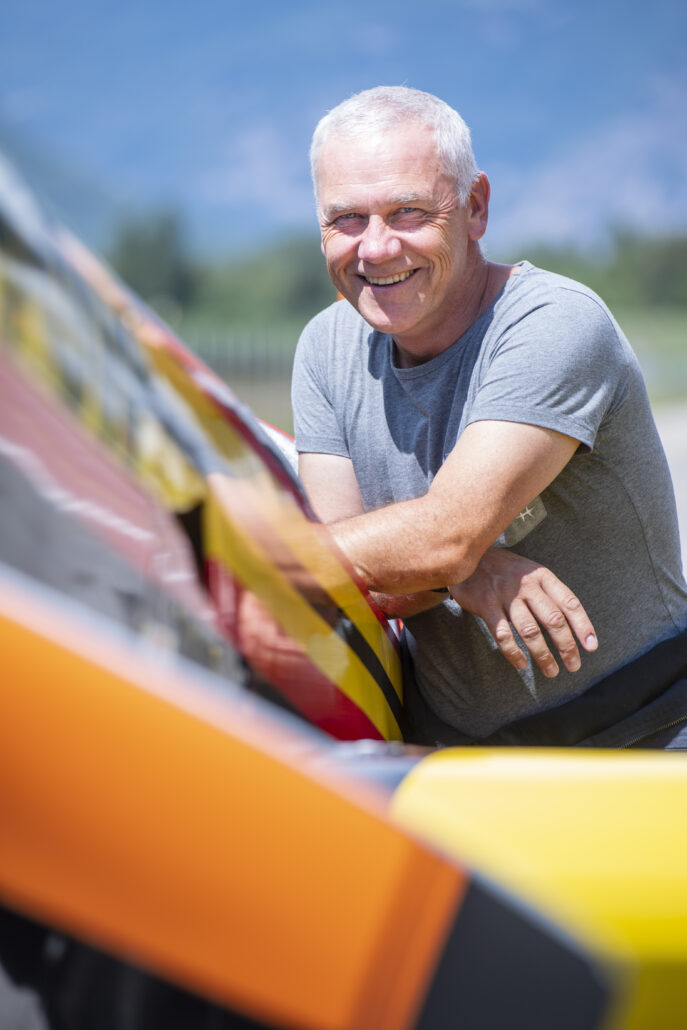 Job: Regional sales manager for a small trading company, which supplies machines and systems for the pharmaceutical and chemical industries

Origin: Grew up in Porrentruy and now living in Herzogenbuchsee

To quote a well known TV commercial: “… What else?”

Flying is fun and, especially with competition aerobatics, you have the possibility to move around in three dimensions while using aerodynamics to the fullest and beyond

I had the chance to grow up in an aerobatics flying school and was allowed to taste that drug since I’ve been seven years old. In my family everything turned around aviation and airfields were my home.

For how long have you been flying and what is your experience in terms of Championships?

Officially I started flying in 1983. Competition only came much later. In 1997 Christian Schweizer convinced me to come to the SNAC in Bex and offered me to use his Extra 230. Since then I’ve only missed the Swiss Championships three times. Internationally I competed at AWAC 2000, EAC 2006, EAAC 2013 and WAC 2015.

I already knew Max Vogelsang when he built his modified version of the One-Design and I was allowed to fly it at the AWAC in 2000. After that I helped build several of his VOTEC and over time I have become the pilot with the most hours on these machines. The VOTEC are powerful, great looking airplanes, which let you fly any aerobatic maneuver that you want. But, best of all, they are a Swiss product, that can rival with all other mounts out in the market, whether as trainers or at Unlimited level.

If there would be only one plane, which would it be?

The Bücker 133 Jungmeister. It has been, since the 1930ies, and will remain for a long time the most beautiful and perfectly balanced aerobatic airplane.

Looping avalanche flown with a Jungmeister. It is a gentle and at first glance boring loop, with a snappy surprise at the top.

I did extensive spin training in Texas, experienced a small self made engine problem together with my father in a Bücker, which he handled differently than I wanted to, spoke with Eric Müller about his landing with broken steering rods and Christian Schweizer told me about the day he had to get back down with a stuck elevator because of a screwdriver, which had been forgotten in his fuselage.

Over time I had an engine lose power, an unintentional knife-edge spin during a demo flight and a stuck elevator right after (fortunately) pulling out of a vertical down line.

In all three cases, after a brief „ oooh sh… !“ moment, what I had practiced before and heard from my pilot friends helped me get out of these situations without any harm to the plane or myself.

What I learned from this is:

Fill your bag with experience before all your luck runs out … and never ever get complacent!

I drive a nice, comfortable motorcycle and I love to spend time in the water swimming or exercising on a stand-up paddle.

We have two good competition formats in Switzerland: SNAC and the Hamilton Swiss Aerobatic Cup. What is missing is the possibility to train directly over airfields throughout the country. It would be great if the SAA could convince more places to give us safe training time (instead of having to fly somewhere out in the countryside or do training camps abroad)