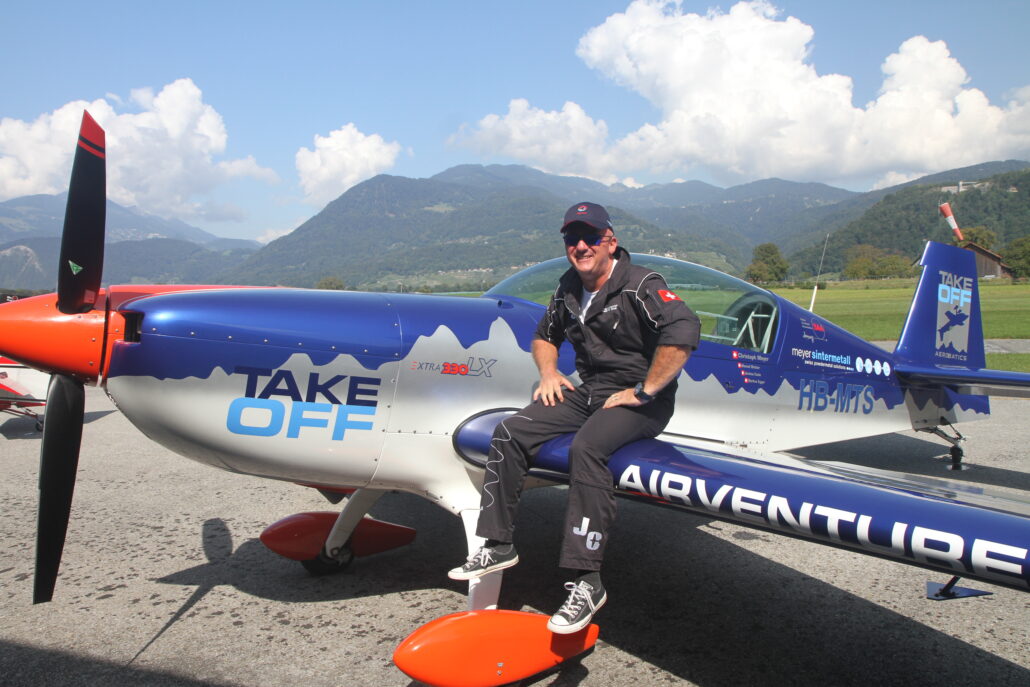 Origin: Monthey (VS) in real life, Geneva (GE) on my papers.

I like machines (planes, cars, bikes, trucks, trains, boats, submarines, …), but in a plane you’ll find some kind of liberty that you can’t find anywhere else. Helicopters are pretty cool too, but the ratio fun/money is not there, on my opinion: you have to be professional. With aerobatics, you really explore and use the 3D.

I’ve dreamed to be fighter pilot, but due to my not perfect vision, that was not possible. When I was 26 and I finally decided to start to fly (after my studies).  At that time, my only goal was to fly aerobatics. By learning to fly, I’ve discovered navigation and flight management, so I decided to continue with an CPL/IR and ATPL. In 2000 I became FI(A) and, of course, in 2001 FI(A) ACR. North to South, I flew VFR from St-Louis (Sénégal) to Honnigsvaag (Norway) or from Scotland to Malta and almost everywhere in Europe. I’ve also made about 100 hours in USA (CA, AZ, UT and NV) to build up hours in 1996-1997.

For how long are you flying and what is your experience in terms of Championships?

I’ve started competition in 2003 in Fricktal-Schupfart as a Sportsman pilot on the Cap-10 B of the Groupe de Vol à Moteur du Chablais (Bex). When I saw these crazy unlimited pilots, I thought they probably are seated next to God. With time, I understood that it’s “simply” a question of training, patience and motivation (and a plane…). I’ve made a break (2013-2018) in term of classic competition for many personal reasons. In 2018, by deciding to be candidate as the SAA President, my idea was only to keep contact with swiss aerobatics world. By thinking of organizing things, the idea to fly again came back more quickly than it disappeared! Aerobatics is just my life.

Some years ago, I have been an Unlimited Swiss National Team Pilot for 3 years (2010-2011-2012) and I had a fantastic WAC 2011 in Foligno (I). International competition is a very good experience, but it’s time and money consuming and swiss pilots can’t fight against “professionals”.

What are your main results?

You’ll simply find them on my SAA EFI profile. ☺️

If there would be only one, which would it be?

🤔 Only one? It’s not possible. None plane can make everything correctly. My aviation dream was to fly, once, a Cap 232 (or a F-4U Corsair, but it’s not a good one for negative snaps…). My first take-off with this machine was as impressive and memorable as my first solo… The Cap 232 got a special place in my heart 🥰, that’s a fantastic plane. Of course, the Extra 330 SC is absolutely amazing and more performing, but it was my second single seat plane. Today, I’m flying an Extra 330 LX and this plane is the perfect double seater and almost as performing as the 330 SC. Very impressive.

What is your favourite figure?

The one I need to learn or improve! 😈

In classic aerobatics; tail slides are pretty cool, because you have to respect them, it’s a pretty good way to break a plane! I like also negative snaps.

In freestyle aerobatics, no hesitation: the “éventail”! Almost nobody is able to fly it properly, some kind of Holy Grail and one of the most beautiful freestyle figure.

First of all, I’d like to tell that in aviation, like in normal life, the most important is people. Aviation is not only machines, it’s definitively people. Simple question you can ask yourself: am I an aviator or a pilot? I think, I’m an aviator. If I hadn’t seen pilots like Jean-Pierre Besson or Paul Taramarcaz flying at (e.g.) Bex International Airshows within the 80’s, I probably wouldn’t have to start to fly. As a teen, they were my heroes. As an adult, if I hadn’t met people who let me fly their fantastic machines, my aviation and aerobatics career wouldn’t be the same, for sure. A warm thank you to them ! Important people met as a trainee : Catherine Maunoury, Patrick Paris and Nicolas Ivanoff. And the most impressive pilots I’ve ever seen flying aerobatics: Xavier de Lapparent (freestyle), Renaud Ecalle (classic and freestyle), Mikhail Mamistov (classic), Svetlana Kapanina (classic) and Rob Holland (freestyle). And many many others who were/are legends of aerobatics and very cool guys to my eyes.

Quotes and stories? There’s a lot! Too many, probably. Here are some:

– I’ve got 4 engines failures (one was definitively my fault…) with a SEP. 😨

– One day, I’ve made an alpine flight with a Texan father and his son by a wonderful sunny summer day. After landing, the father said: “Son, today we’ve made a life experience!”. That was true, and I never forget that we are very lucky to fly here; it’s not “normal”, we are living in a wonderful country with one of the best landscapes of the world.

– Once, I’ve made an aerobatic pax flight from Lausanne with an unknown guy, a little bit shy about his competence in aviation and aerobatics (he told me that his was a former helper in military transportation aviation), his name was Franklin Chang-Diaz (check Google if you – as I – don’t know him). After the flight, that was cool to discuss with him about his job. 🚀

– I’ve got a lesson on the Eurofighter Typhoon simulator with Maurizio Cheli (same as for Franklin) in Torino. That plane is cool: automatic tail slide self-recovery! Also, a wonderful meeting and souvenir.

– In USA, I’ve landed on a former B-52 AFB (today an uncontrolled airport (KMER) in Atwater, CA) with a Piper Tomahawk: everything was oversized for the B-52s: runways, taxiways, parking spots, marks, etc. Amazing. And don’t mess with runway numbers 13-31… 🤭

– I’ve made 3 flights (different positions in the formation) with the Breitling Jet Team during demo flights. The experience of supporting 6 G for 40 seconds is an experience, even for an aerobatic pilot…

– I’ve made 3 parachute jumps; why climb, open the door and get out of plane in the air? It’s stupid 😂. I consider that I have 3 more take-offs than landings.

– As an FI(A) ACR, my question was: will one of my students overtake me and beat me in an aerobatic contest? Answer is yes! Emiliano did it: he won twice the Unlimited at SNAC. Guillaume Jacquet is definitively working on it… This is a great reward, because it means that I probably was able to transmit my passion. I’m happy.

I’m never grounded! I’m dreaming a lot and I’m an observer (the world, my world, simple things, people). I’m an amateur photograph, gardener in summer, cat lover (I’m absolutely fascinated by these animals), traveller (not only by plane…), Lego Technics builder, reader (news, politics, history, sciences, techniques). I play tennis, sometimes, I’m walking, and I like water sports, sail, windsurf, kayak, bodyboard, snorkelling, waves playing, but not enough time to practice… Some kind of jeeping and rocks crawling. “As slow as possible and as fast as necessary” is a off-road concept, not a swiss sanitary concept (sorry Mr. Berset)! 🤪

Nowadays, recreational aviation is in danger, especially aerobatics: noise complaints, restrictions, pollution (…🙄…), less and less aerodromes where is “acceptable” to fly aerobatics: we must stand united. Associations in general are also in danger; less and less people want to engage themselves for others and give some time for a hobby: everything is running “itself”. So, my wish is that we can find, all together, a new way to motivate our members (and first ourselves!) to make this association more alive. My simple wish could be summed up that I hope that another SAA president will have to organize the SAA 100th Anniversary!