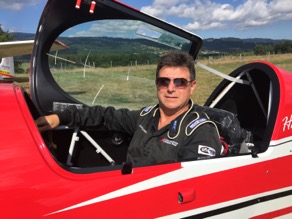 Job: Engineer and manager in the oil and gas industry, exploration and production for 44 years all over the world. Retired since May 2018

Already as a kid I loved aero planes and I did my apprenticeship at FFA Altenrhein with the objective of becoming a pilot.

How did you start ?

It started with 2 courses of IAP and I finished my PPL in Altenrhein. Unfortunately I did not finish the military pilot school in Magadino, which at that time still was on Bücker Jungmann. But I had my PPL and life was good.

For how long are you flying and what is your experience in terms of Championships ?

The first IAP course was in April 1968 and the second one in May 1969. I got my PPL in July 1969, a few weeks after my 19th Birthday. The Confederation continued to sponsor my flying education with an “Acro” course and a “Radio Navigation” course.

I did not pursue to become a professional pilot and instead studied engineering and spent my career in the oil and gas exploration and production industry all over the world.

But I never lost sight of my passion for aerobatics and luckily I have a very understanding family. I started aerobatic competition in the early 90’s with Sportsman in the UK on a Pitts S-2A. Next I moved to the US and flew Pitts S-2B up to Advanced and continued up to Excellence after our transfer to France. My next assignment was in Russia where I started to fly Sukhoi 26. Thus my first Unlimited competition in Switzerland was in 2001 on Pierre Marmy’s Su-26, which Pierre graciously let me fly. I participated in all SNAC’s since then. Next was Cap 232 in France and I competed in every European and World Championship since 2004.

Of course I need help and I participate in several training camps every year mainly with Patrick Paris, but also with Nicolas Ivanoff, Sergei Boriak and Coco Bessiere. I am particularly thankful to Patrick who has taught me so much that it feels like everything I know about competition aerobatics and being an aerobatic pilot.

If there would be only one, which would it be ?

What is your favorite figure ?

I love negative flat spins, you see the whole world turning and it is so smooth you would like to go on and on.

Any quotes or short stories linked to your pilot’s life you would like to share with us ?

First I would like to share with you how competition aerobatics has influenced my life. Flying, and in particular competition aerobatics, demands a lot of rigor and sticking to operational and safety procedures without compromise. It also teaches you how to deal with stress, improves your mental capacity and forces you to keep in physical shape. All those things, without a question, had a very positive impact on my professional life, my health and my wellbeing in general.

Secondly I have experienced two flying incidents, which have taught me to be humble, learn and become a better and safer pilot.

In 2003 I flew with the Cap 232 to a French competition from Chartres to Chateauroux. It was extremely hot and I did not close the canopy correctly. I noticed this about 5 to 7 minutes into the flight. My quick solution was to slow down and try to close the canopy. Unfortunately it opened wide and I had to hang on to it with all my strength until I managed to close it. In the process my briefcase and a few lose items fell out of the plane. I continued my flight to Chateauroux without further problems, although slightly shaken by the experience. I did return by car to the site with the help of my GPS and I found my briefcase as well as most of the items which fell out. I was lucky that nothing more serious happened. Of course it was very silly to try to close the canopy during the flight, I should have immediately turned around in order to land back in Chartres. Since that day closing the canopy before take-off is one of my key check points.

During EAC 2010 in Touzim in the Czech Republic, a finished my 4 Minute Freestyle programme and prepared for landing. The grass runway was in poor condition, water logged in many places. Actually there were only a few stretches of landing strip which were practicable and marked. I mistook a mark as the beginning of the good part of the runway but it was still very soft there. Upon touch-down the tires sank in. I found myself immediately tipping on the nose and I came to a stop in this configuration about 150 m later. Fortunately the plane did not turn over on its back and I got out of the plane without a problem. I was not injured at all except for a little bit of hurt pride. My beautiful Cap 232 was a write-off and that is why I now fly an Extra 330SC. I don’t know if I could have avoided this crash landing, but it drove home the importance of the landing after a competition flight. Now I take my time once I have done the wing rocks after the competition flight. I make sure that I have calmed down before fully concentrating on the very important phase of flight which is the landing, until the aircraft is safely parked and the engine is switched off.

I do sports, walking, running, cycling, cross country skiing, skiing, abdos. I absolutely love off-road driving. Already as a young engineer I drove around the oil fields in the Libyan desert and more recently we lived in the UAE for many years. I learned the skills of driving in dunes and rocks, progressed to Marshal and I led many groups of friends on camping trips deep into the desert. Now we live back in Switzerland and I bought a full fledged 4×4 SUV which I slowly prepare to go on long overland trips.

Christiane and me have four grand-children, which is probably one of the nicest things of them all.

What is your wish in terms of SAA or aerobatics in Switzerland ?

I would like to see more new pilots taking up aerobatics and in particular competition aerobatics. We are on a good track with the Hamilton Swiss Aerobatic Cup, the Freestyle Cup and of course SNAC, as well as the proposed training camps. But we need to work hard on promotion and motivation. I also think that it is important that we go with the times and new technologies with respect to the environment, and integrate this in our future activities. I am in the committee of the SAA and I represent our interests as CIVA Delegate. I hope to be able to contribute to the development of our beloved sport in Switzerland and beyond.

Who is the next MoM ?

Swiss Championships Unlimited: every year from 2001 except 2005

Various airshows/event demo flights in France and in Switzerland