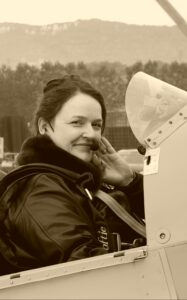 Mainly because of the feeling of flight, it is just magic! Difficult to describe it any better.

I got the aviation virus the first time I flew in a plane. It was for a holiday in Bordeaux, with my family, I was around 13 yrs old. At the end of the holiday, it was clear to me that firstly I wanted to fly myself one day and secondly, I wanted to work in aviation. Both flying and the atmosphere in aviation are fascinating. This is how I got the flying bug!

I had the chance to attend the IAP classes, for two courses. And during one of these courses, my instructor told me I was putting in too much rolling rate around the circuit… It looks like I wanted naturally to do aerobatics.

Then I had the chance to go flying in a Stearman in Ecuvillens (with the same instructor) and I made my first loop over the Lake of Gruyere. I’ll still remember this moment as during the last part of the first manoeuver I was smiling like a little girl. It was clear, sooner or later I wanted to learn how to do it myself.

In 2008, I obtained my PPL (in Grenchen). Shortly after I gained the licence, I made the transition on to a Piper Cub and because of the tail wheel the goal was clear. It was the kick start to move to aerobatics and then I passed the ACR licence in 2012 in Langenthal with Markus Rüesch as FI.

In 2016, we are amongst the Bücker pilots at the SNAC in Yverdon, category Sportsman. What is your objective for this coming season and do you have a long term goal after this?

To enjoy the flying and the time spent with the group at the airfield!

For this year, I’ll still keep on trying to “push” the Jungmann to the highest level and show to the group that we can still fly this plane at the same level as the Extra for instance, in this category. Moreover, I saw that there is a new pilot also registered  in the same category. It will be interesting to play a friendly competition with him.

I don’t have goal to be the first etc.. but I want to keep on improving and if I can move forward within the category then I will for sure… as long as I keep on smiling, having fun and progressing. Nowadays, I’m also preparing to switch to the Votec in Langenthal. I’m looking forward to playing with it on the new manoeuvers.

You are well known to be a “Bucker lover”… but you started by flying the Extra and now, you are mentioning Votec…but if there should be only one plane which one would it be?

Don’t know why but I was expecting this answer

Now… let’s imagine you are flying your Bücker at the end of day, in the perfect environment etc… what would be your dream figure?

It would be a quiet evening on a warm summer day, with less thermal energy, temperature getting fresher, and almost no traffic remaining in the air … close to sunset time. Perfect set up.

Stall turn… the perfect combination between technicality and elegance… even if some days it doesn’t quite come off … this is still one of the most relevant for aerobatics.

What is your flying experience now?

360 flying hours in total and approx. 90hrs on the Bücker.

A few years ago, I was in a bookstore, searching for some Christmas presents for the family and saw the cover of Catherine Manoury’s book “L’étrange bonheur de voler”… my first reaction was to buy it, but as it was only a few months before Christmas I decided to wait a little bit. And indeed it was below the festive fir tree, a gift from my mother, who still finds it strange that her daughter likes to fly !

Books which have since influenced me are amongst others “Le messie récalcitrant” by Richard Bach and Marianne Maire’s book “Jeudi 12”.

YES! Going out for a mountain or road bike ride, or playing with the wind on a sailing boat. If the weather is too rainy, bake something sweet, take my knitting needles out in order to make a pullover, or the sewing machine to perhaps sew a helmet for open-cockpit pilots. (Typically for the Bücker pilots).  I’ll be more than happy to make one for you 😉

Who’s the next MoM ?
Hanspeter Etter